The main research and conference facility of The Levy Economics Institute is Blithewood, a turn-of-the-century mansion overlooking the Hudson River on the campus of Bard College.

The land dates back to a vast track bought from the Native Americans in 1680 by Colonel Pieter Schuyler. The grounds began their metamorphosis from untamed woods into a carefully landscaped estate in the 1830s, when Robert Donaldson of North Carolina acquired the property and gave it the name Blithewood. He commissioned Andrew Jackson Downing, one of the foremost landscape artists of the day, to design the grounds. In 1853 Blithewood was purchased by John Bard of Hyde Park, who in 1860 gave a corner of the estate for the founding of St. Stephen's College, which became Bard College in 1934. In 1899 Captain Andrew C. Zabriskie, a cattle breeder, numismatist, and antiquarian, purchased the estate and retained Francis Hoppin, an alumnus of the architectural firm McKim, Mead & White, to design a manor house and garden. Hoppin produced a house in an eclectic, grand style, blending architectural and decorative elements from centuries of English mansion design with the latest turn-of-the-century technology. Captain Zabriskie's son donated the estate to Bard College in 1951. Finally, the College transferred Blithewood to the Levy Economics Institute in 1987. 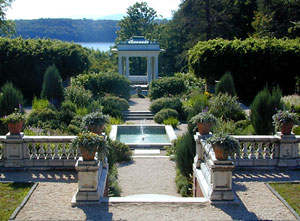 Restoration of the building was directed by the architectural firm of James Polshek and Partners, noted for its restoration of Carnegie Hall. Marvin D. Schwartz of The Metropolitan Museum of Art supervised the furnishing of rooms in period style. The formal Italian garden was also restored. The renovated Blithewood now contains offices for scholars and staff, a library, and several lecture and meeting rooms. It is equipped with advanced computer and communications systems to provide extensive research resources.

More on our Facilities >