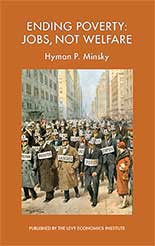 Although Hyman P. Minsky is best known for his ideas about financial insta­bility, he was equally concerned with the question of how to create a stable economy that puts an end to poverty for all who are willing and able to work. This collection of Minsky’s writing spans almost three decades of his published and previously unpublished work on the necessity of combating poverty through full employment policies—through job creation, not welfare.

Minsky was an American economist who studied under Joseph Schumpeter and Wassily Leontief. He taught economics at Washington University, the University of California–Berkeley, Brown University, and Harvard University. Minsky joined the Levy Economics Institute of Bard College as a distinguished scholar in 1990, where he continued his research and writing until a few months before his death in October 1996. His two seminal books were Stabilizing an Unstable Economy and John Maynard Keynes, both of which were reissued by the Levy Institute in 2008.

Minsky held a B.S. in mathematics from the University of Chicago (1941) and an M.P.A. (1947) and a Ph.D. in economics (1954) from Harvard. He was a recipient in 1996 of the Veblen-Commons Award, given by the Association for Evolutionary Economics in recognition of his exemplary standards of scholarship, teaching, public service, and research in the field of evolutionary institutional economics.

This book was made possible in part through the generous support of the Ford Foundation and Andrew Sheng of the Fung Global Institute.