Is the Link between Output and Jobs Broken? 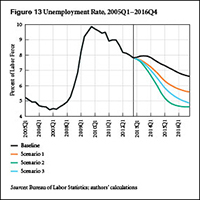 As this report goes to press, the official unemployment rate remains tragically elevated, compared even to rates at similar points in previous recoveries. The US economy seems once again to be in a “jobless recovery,” though the unemployment rate has been steadily declining for years. At the same time, fiscal austerity has arrived, with the implementation of the sequester cuts, following tax increases and the ending of emergency extended unemployment benefits just two months ago.

Our new report provides medium-term projections of employment and economic growth under four different scenarios. The baseline scenario starts by assuming the same growth rates and government deficits as the Congressional Budget Office’s (CBO) baseline projection from earlier this year. The result is a new surge of the unemployment rate to nearly 8 percent in the third quarter of this year, followed by a very gradual new recovery. Scenarios 1 and 2 seek to reach unemployment-rate goals of 6.5 percent and 5.5 percent, respectively, by the end of next year, using new fiscal stimulus.

We find in these simulations that reaching the goals requires large amounts of fiscal stimulus, compared to the CBO baseline. For example, in order to reach 5.5 percent unemployment in 2014, scenario 2 assumes 11 percent growth in inflation-adjusted government spending and transfers, along with lower taxes.

As an alternative, scenario 3 adds an extra increase to growth abroad and to private borrowing, along with the same amount of fiscal stimulus as in scenario 1. In this last scenario of the report, the unemployment rate finally pierces the 5.5 percent threshold from the previous scenario in the third quarter of 2015. We conclude with some thoughts about how such an increase in demand from all three sectors—government, private, and external—might be realistically obtained.

Download:
Strategic Analysis, March 2013
Associated Program:
The State of the US and World Economies


The Pandemic, the Stimulus, and the Future Prospects for the US Economy