Research Scholar Felipe Rezende is a senior associate at PricewaterhouseCoopers. His research has focused on financial macroeconomics, monetary theory and policy, and finance for development. He previously taught at Bard (2018), Hobart and William Smith Colleges (2010-2017), and the University of Missouri–Kansas City (2009).

The author of more than a dozen book chapters and articles, Rezende was project director on the Ford Foundation–supported research project, “Financial Governance, Banking, and Financial Instability in Brazil: Analysis and Policy Recommendations.” His work has also appeared in the Journal of Post Keynesian Economics, PSL Quarterly Review, Journal of Economic Issues, and International Journal of Political Economy, among other journals, and he is the editor of the books Financial Stability, Systems and Regulations and Financial Macroeconomics. He has presented at professional meetings and conferences nationally and internationally in Brazil, Great Britain, Indonesia, China, Japan, Italy, and Germany.

Rezende is a regular columnist in American and Brazilian newspapers. He has testified on a number of occasions in hearings of the Senate and the House of Representatives Committees of the Brazilian Congress. 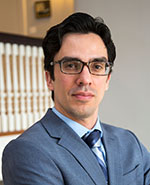