For more than two decades, Parenteau served as chief U.S. economist and investment strategist at RCM, an investment management company that is part of Allianz Global Investors. In this effort, he guided the global and domestic asset allocation, sector, factor, and industry selection decision making of RCM portfolio managers and equity analysts. In 1999 and 2000, he presented several papers at the Levy Institute’s annual conference on financial structure that applied Hyman P. Minsky’s financial instability hypothesis to the late-1990s technology bubble. He further explored the macrodynamics of financial imbalances in papers presented at the Political Economy Research Institute (2001), the annual International Post Keynesian Workshops in 2002 and 2004, and the Eastern Economic Association proceedings in 2005. Versions of his papers were published as chapters in Contemporary Post Keynesian Analysis (L. R. Wray and M. Forstater, eds.), 2004, and Financialization and the World Economy (G. A. Epstein, ed.), 2005.

Parenteau earned a BA in political economy at Williams College in 1983. He completed a chartered financial analyst degree in 1989 and then served as a regular lecturer for all three levels of the Security Analysts of San Francisco CFA preparation course until 1999. 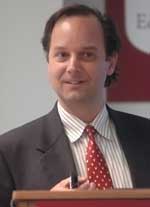