Xinhua Liu is a professor of economics at Shaanxi Normal University in China. Her current research focuses on using a Minskyan approach to give an alternative explanation of China’s financial structure and reforms, as well as on introducing modern money theory to China. She has published more than 30 papers, mostly on Chinese shadow banking, local government debt, bank lending, and financial instability in China. She has coauthored several papers with L. Randall Wray that have analyzed China’s financial system using both Minsky’s theory as well as modern money theory, including Levy Working Paper No. 783 (2014), “Options for China in a Dollar Standard World: A Sovereign Currency Approach,” the research for which was partially funded by a grant from the Asian Development Bank. Liu was a visiting professor at the University of Missouri–Kansas City in 2007 and 2009. 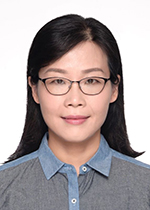