Research Associate Yan Liang is Peter C. and Bonnie S. Kremer Chair in Economics and professor of economics at Willamette University and a research scholar at the Global Institute of Sustainable Prosperity. Liang specializes in Modern Monetary Theory, international trade and finance, and economic development with a special regional focus on China. She publishes in various heterodox journals, including Journal of Economic Issues, International Journal of Political Economy, and Forum for Social Economics, as well as China-focused journals such as the Chinese Economy and China & World Economy; Liang has also contributed to several edited volumes. She has received several grants from the Institute for New Economic Thinking, the Luce Foundation, and the Chinese Ministry of Education for teaching and research and serves as guest editor for the Chinese economy and as president of the Association for Institutional Thought. Liang holds a BA in economics from Zhongshan University (China) and a Ph.D. in economics (with distinction) from the University of Missouri–Kansas City. 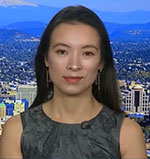