By Jan A. Kregel. Edited by Rainer Kattel. Foreword by G. C. Harcourt. 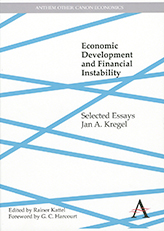 This volume is the first collection of essays by Jan Kregel focusing on the role of finance in development and growth, and it demonstrates the extraordinary depth and breadth of this economist’s work. Considered the “best all-round general economist alive” (Harcourt), Kregel is a senior scholar and director of the monetary policy and financial structure program at the Levy Economics Institute, and professor of development finance at Tallinn University of Technology. These essays reflect his deep understanding of the nature of money and finance and of the institutions associated with them, and of the indissoluble relationship between these institutions and the real economy—whether in developed or developing economies. Kregel has expanded Hyman Minsky’s original premise that in capitalist economies stability engenders instability, and Kregel’s key works on financial instability, its causes and effects, as well as his discussions of the global financial crisis and Great Recession, are included here.
Published by: Anthem Press
Associated Program:
Monetary Policy and Financial Structure