Michael Hudson is a financial analyst and president of the Institute for the Study of Long Term Economic Trends. He is distinguished research professor of economics at the University of Missouri–Kansas City and professor at the School of Marxist Studies, Peking University, in China.

Hudson has served as an economic adviser to the US, Canadian, Mexican, and Latvian governments, and as a consultant to UNITAR, the Institute for Research on Public Policy, and the Canadian Science Council, among other organizations. While at the Hudson Institute, he published studies on world monetary reform (with Herman Kahn), the balance‑of‑payments implications of the energy crisis, technology transfer, and related topics for the Energy Research Development Agency, the National Endowment for the Humanities, and other US agencies. He is a past director of economic research at the Riga Graduate School of Law and has served on the graduate faculty of the New School for Social Research, as a guest lecturer at the Berlin School of Economics, and as a visiting scholar at New York University. In conjunction with Harvard University’s Peabody Museum, he headed an archaeological research team on the origins of private property, debt, and real estate. This group has published five colloquia on the origins of economic civilization in the ancient near East.

Hudson has written or edited more than 10 books on the politics of international finance, economic history, and the history of economic thought, including Super Imperialism: The Economic Strategy of American Empire (Wrapping, 1972); Global Fracture: The New International Economic Order (Harper & Row, 1977); and Trade, Development and Foreign Debt (Pluto Press, 1993). His trade books have been translated into Japanese, Chinese, German, Spanish, and Russian. He sits on the editorial board of Lapham’s Quarterly and has written for the Journal of International Affairs, Commonweal, International Economy, Financial Times, and Harper’s, and is a regular contributor to CounterPunch. His recent publications include: 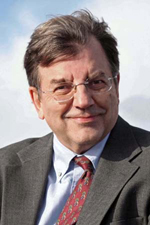