Senior Scholar  Nilüfer Çagatay is associate professor of economics at the University of Utah, Salt Lake City. Her research has focused on gender and development; international trade theories; and on engendering macroeconomics and international trade theories and policies. In 1994, with Diane Elson and Caren Grown, she founded the International Working Group on Gender, Macroeconomics, and International Economics (GEM-IWG). She was coeditor of World Development's November 1995 special issue on gender, adjustment, and macroeconomics, and its July 2000 special issue on growth, trade, finance, and gender inequalities. Between 1997 and 2000, she worked as economic advisor at UNDP's Social Development and Poverty Elimination Division in New York. 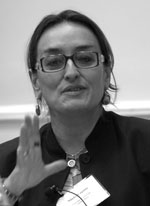