The Interlocking of Time and Income Deficits 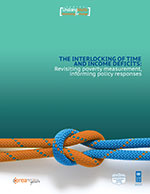 This report is published as part of the “Undoing Knots, Innovating for Change” series, issued by the United Nations Development Programme (UNDP) Regional Centre for Latin America and the Caribbean through its Gender Practice Area. It includes findings from a UNDP-supported research project undertaken in 2011 by the Levy Economics Institute with the objective of proposing an alternative to official income poverty measures, one that takes into account household production (unpaid work) requirements—an issue still largely ignored by official poverty estimates. This has significant consequences for policymaking. The resulting Levy Institute Measure of Time and Income Poverty is a two-dimensional measure that jointly tracks income gaps and time deficits. Using this alternative measure, the authors present selected results of empirical estimates of poverty and compare them with official income poverty rates for Argentina, Chile, and Mexico, with a focus on the study's policy implications.


Should Corporate Tax Hikes Be Included in Biden’s “Build Back Better” Plans?