Research Associate Martin Shubik is Symour H. Knox Professor Emeritus of Mathematical Institutional Economics at Yale University, and a past director of Yale's Cowles Foundation for Research in Economics. A specialist in strategic analysis, the economics of corporate competition, and the study of financial institutions, Shubik has consulted for the RAND Corporation, the Ford Foundation, and several foreign government agencies. He has also served on General Electric’s Operations Research team, on the staff of the T. J. Watson Research Laboratories at IBM, and as a visiting professor at the University of Chile in Santiago, the Institute for Advanced Studies in Vienna, and the University of Melbourne.

Shubik is the author of over 300 articles and more than a dozen books. Recent publications include:

He holds a BA in mathematics and an MA in political economy from the University of Toronto, and an AM and a Ph.D. in economics from Princeton. 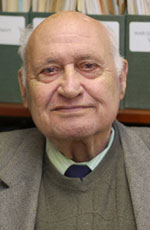